skip to main | skip to sidebar

Several friends from my course and I attended the termly CathSoc ceilidh last night. I can't emphasize how much I love ceilidhs, though I'm afraid I showed up late last night and missed a few of my very favorite dances.

Tonight was, however, the first time I've done a dance with a "basket" and enjoyed it. For anyone who doesn't know, a basket is a move at a ceilidh when two men put their arms around two women's waists. The women put their arms over the men's shoulders. In the Irish version they spin around, which is fun. In the German version (read "preffered by macho Englishmen"), the men spin so quickly that the women's feet are lifted off the ground. This is only fun when (a.) the women know what is going to happen and (b.) when the men are strong enough to lift the women without making the women feel like the cause of an immediate hernia. So, bully to the men I was dancing with--I thoroughly enjoyed myself.

I'm sorry that I haven't perfected the art of taking photos yet. Rest assured I am practicing. We can cross our fingers that CathSoc posts their photos on Facebook. Until then, you can always satisfy yourself with my more-detailed description of a ceilidh here.
Posted by ...and Enide at 10:23 No comments:

When I told my American friends and family last year that I was moving to England, one of their first responses was to warn me about how poorly treated I would be in Europe. Sixteen months later, I have to confess that that ill treatment has hardly ever reared its ugly head. Sure, things have been said that I didn't like about our Former President, and the English have been eager to volunteer their opinions about our political system. The English carry with them many, many misunderstandings or oversimplifications of American culture, but they are generally kind and generous to individuals of all national origins--at least in Oxford.

That is why I am so annoyed--angered--by Americans who "act the part" abroad. So much of the American perception of their reputation overseas is self-projected; we're the ones who assume we are brash, uncultured, and backwards. It is a real shame when an American becomes a parody of that self-perception, putting him or herself forward to the world as an ambassador of a culture of insensitive boors. Particularly in Oxford, Americans abroad ought to know better.

Tonight, I am ashamed to say, was the second time I've heard the same an antiquated and racist expression involving an extremely impolite racial slur in Oxford. Both times it was used by (North--one was Canadian) Americans. Both times it was in a professional, academic research seminar. And both times it was used in a context where it is completely unnecessary. Perhaps the two men felt that, outside of the United States, where racial tension is a different kind of problem, the expression wouldn't be poorly received. But the English students in the room were almost as offended as I was!

The two incidences have left me to wonder just how often Americans really do present themselves as poor cultural ambassadors to the rest of the world. How can I expect my English friends to believe that America is not the backwards, racist place they are sometimes told it is by the BBC if some of our most clever ex-patriots behave this way?
Posted by ...and Enide at 22:38 No comments: 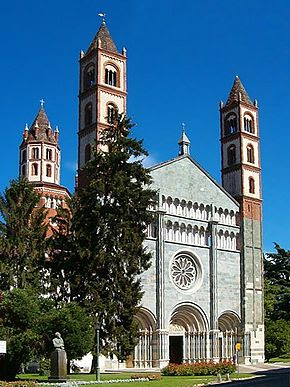 The English Faculty have decided to give me £400 for a trip to Vercelli, Italy! I'll be able to look at a number of amazing medieval manuscripts.

The best of these is one of only four major manuscripts containing Anglo-Saxon poetry, the Vercelli Manuscript. It some of my very favorite religious poems. The very best of these is called The Dream of the Rood. It is a short poem about the crucifixion told from the perspective of the cross. I still contend that it is one of the greatest poems ever written in English. You can read my translation of it here.

I'm very grateful to the English Faculty for funding my trip and I look forward to writing more about it later.
Posted by ...and Enide at 20:37 No comments:

Oxford in the Snow: A Brief Photo Essay

Oxford, and all of England, had unusually heavy snowfall last week. Although I was amused at the way the entire country shut down, it did create some amazingly beautiful scenes:
This is supposed to be the site of C. S. Lewis' inspiration for The Lion, the Witch, and the Wardrobe. The story goes that he left the University Church of Saint Mary the Virgin (right) one Sunday, disgruntled by a sub-par sermon. He walked out into the evening and saw these fauns, beautifully illuminated by a single lamppost. On the door there is a lion. 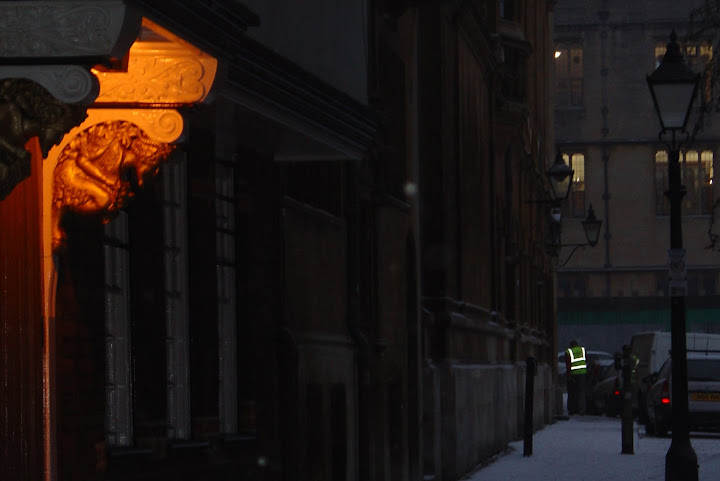 This is a street sign outside the walls of Exeter College. The metal cross on the wall behind the sign was once used by delinquent undergraduates to climb back into college after curfew. 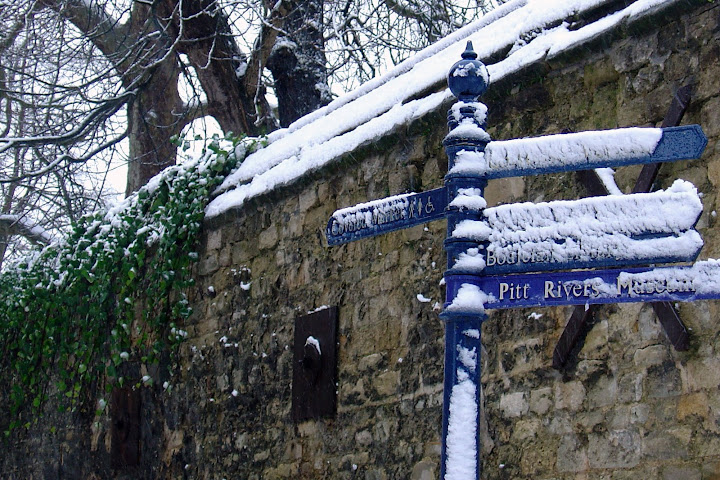 This is one of the snow-covered heads outside of the Sheldonian Theatre. The building was built after a design by Sir Christopher Wren and is currently used for graduations and concerts. 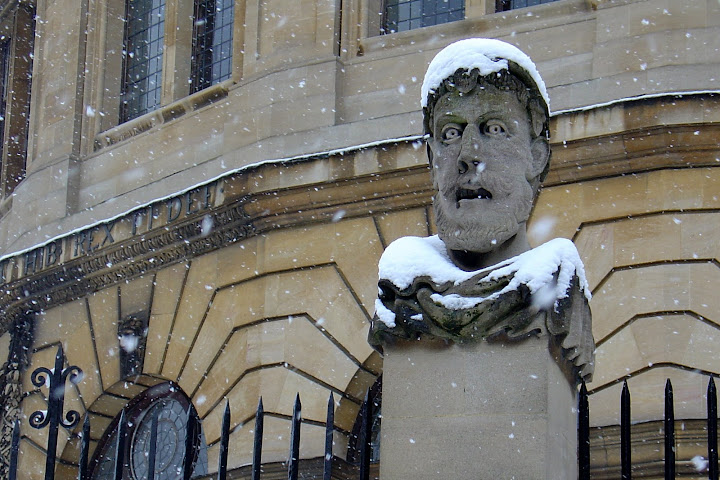 This is a view from Holywell Cemetery. The English treat cemeteries differently than Americans do. When a cemetery is full, the gravestones will often be removed. The lawn will be mowed and it will be treated as a park. 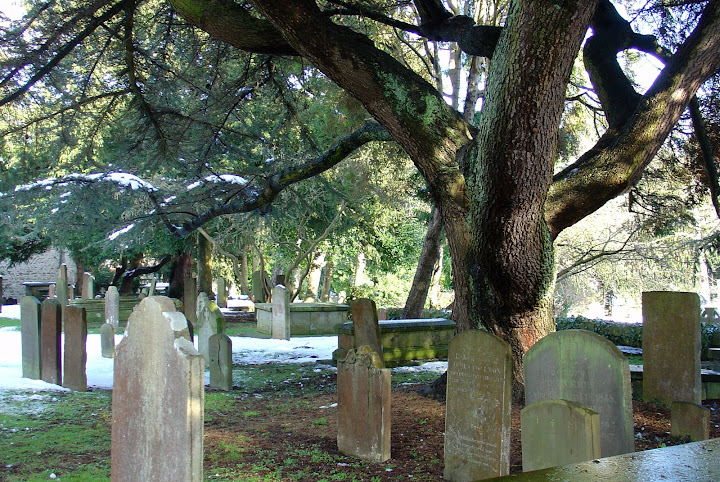 You can see more of my photos of Oxford in the snow here.
Posted by ...and Enide at 20:42 No comments:

Amateur comes from the French 'amator,' or lover--one who engages in study for pleasure, purely because she loves it. I want to share what I'm learning with you in the hopes that it can help you learn to love the English language and its incredible variety of literature too!